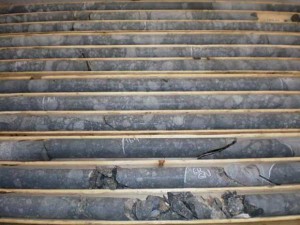 THUNDER BAY – As reported earlier on Zenyatta Ventures Ltd. is offering greater detail on findings of graphite in their Albany Project. The company has provided results from an independent mineralogical study of drill core samples from the newly discovered Albany Graphite Deposit located near Hearst in north-eastern Ontario.

The following significant observations were made: Flake sizes of coarse, medium and fine ranging from 50 to greater than 300 microns (-270 to +40 mesh size); Characterized as a magmatic hydrothermal style of graphite mineralization (similar to the high value Sri Lankan type deposits)

Graphite represents essentially all of the total reported Carbon assay values (i.e. Carbon related to carbonate is less than 1%)

Aubrey Eveleigh, President and CEO stated “Zenyatta management considers these latest results to be very important, especially the range in flake size, which includes the high value coarse flake. Coarse flake graphite is greater than 175 microns (or +80 mesh) in size. Flake size and purity are key parameters in establishing the potential value and marketability of any graphite product derived from the Albany Graphite Deposit. The Company is planning to conduct metallurgical testing of the graphite zones and carry out a more aggressive drilling campaign to determine the full extent of the deposit”.

The mineralogical report was prepared by Dr. Andrew Conly, Ph.D. of Lakehead University Mineralogy and Experimental Laboratory (“LUMINX”) in Thunder Bay, Ontario. The petrographic observations were from four samples of the graphite-rich breccia in zone #2 of drill hole Z11-4F1.

As previously announced in the Company’s news release dated 19 January 2012, a recent drill hole on the Albany project testing a large airborne EM conductor measuring 1400 metres by 800 metres, intersected eight (8) separate and extensive graphite-rich breccia zones. The geophysical anomaly was explained by the conductive graphite matrix which is highly unusual in character and size. Core photos, section and maps can be seen on the website at www.zenyatta.ca and will also be available for viewing in the Core Shack at the PDAC on Sunday and Monday. The following lists the results for total carbon (“C”) from each of the zones, which are believed to represent true width (in metres):

The graphite discovery is located 30km north of the Trans Canada Highway and a gas pipeline. A rail line is located 70km away and an all-weather road approximately 4-5km from the graphite deposit. The deposit is near surface, underneath glacial till overburden.

A similar deposit may be the vein graphite deposits of Sri Lanka. Vein graphite has been interpreted as being derived by hydrothermal fluids, as in the Albany Graphite Deposit. The origin of the graphite is proposed to be derived from a CO2 rich fluid, likely related to the emplacement of a carbonatite. This CO2 rich fluid could promote hydraulic fracturing (brecciation) and precipitation of vein graphite. Graphite veins and breccias are quite rare, and very few are described in the geologic literature.

The Bogala Mine, a Sri Lankan graphite deposit, has been in production since 1847. It is a high grade, narrow vein (20cm), underground mine. Sri Lankan graphite still enjoys great demand due to its unusually high purity and unique physical properties.

The outlook for the global graphite market is very promising with demand growing rapidly from new applications in clean technology including fuel cells, solar panels and rechargeable batteries. China produces over 70% of global supply and, like other commodities, now has less available for export as domestic demand grows. As global demand outstrips supply, graphite prices have increased substantially, more than doubling over the past three years.
Graphite is a natural form of carbon with the chemical formula C, which it shares with diamond and coal. It is now considered one of the more strategic elements by many leading industrial nations, particularly for its growing importance in high technology manufacturing and in the emerging “green” industries, such as hybrid vehicle components.

The application for graphitic material is constantly evolving due to its unique chemical, electrical and thermal properties. It maintains its stability and strength under temperatures in excess of 3,500°C and is very resistant to chemical corrosion. It is also one of the lightest of all reinforcing elements and has high natural lubricating abilities. Some of these key physical and chemical properties make it critical to modern industry.
Mr. Aubrey Eveleigh, P.Geo., President and CEO, is the “Qualified Person” under NI 43-101 and has reviewed the technical information contained in this news release. Analyses was carried out by ALS Chemex Labs using a total carbon (LECO) method code of C-IR07 and a multi element package ICP-MS with code ME-MS81.

Zenyatta Ventures is on the TSE Venture ZEN