THUNDER BAY – Editorial – There are crimes that catch the community’s attention. On the weekend, a woman was attacked and robbed outside Fort William Gardens. Thunder Bay Police responded to the robbery on February 20th which occurred at approximately 7:41PM. Police report, “The female victim had just
dropped off her two kids at the Headley concert at the Gardens and while walking back to her vehicle was approached by two native males asking for a cigarette”.

“They then punched the victim in the face and stole her purse which contained a large quantity of cash. The males are described as being native, approximately 15 to 16 years of age, one was tall and slender wearing a white hoodie and the second was short and stocky wearing a black hoodie”.

These kinds of crimes are ones that strike fear into the people in our community as well as generate racial divides within Thunder Bay.

Police report that they will be stepping up their presence at Fort William Gardens during events at the facility. That is a move likely long overdue.

What is also long overdue is a move by the Thunder Bay Police into social media, and into more open reporting of what is happening in our community when it comes to crime. Police services in smaller communities than Thunder Bay across Ontario have engaged their residents in a far greater manner.

Chief J.P. Levesque is missing a huge opportunity here by ignoring the opportunities presented by social media that modern police services across North America have already adopted. When you visit the Thunder Bay Police Service website, on February 23rd and the Chief’s message is speaking about Christmas, it demonstrates that the Internet isn’t something that the police executive is taking all that seriously. In a community where almost ninety per cent of the citizens are online, that simply isn’t good enough.

The reason that Thunder Bay’s police service needs to move into social media is to start a greater engagement with the public. Our residents need to be able to know what is happening in far greater depth and reassured that solid steps are being done to make our community safer. It will not take a large sum of money to do this, it will take leadership.

The issue of crime in our city is one that needs to be addressed with far greater depth than is currently being done. All it takes is a few moments for the average citizen on Crime Mapping to realize that our front-line police officers face a real problem. 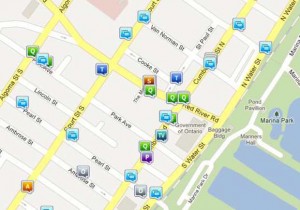 The past thirty days, illustrated on the Crime Map show a large number of crimes, and multiple crimes at the same locations. They also demonstrate that not enough of what is happening is actually being reported by the Thunder Bay Police Service.

Additionally, the process where many of the people arrested for the property crimes, assaults and other incidents are out on probation for previous convictions speaks to what can only be a complete lack of respect for the justice system by many of these repeat offenders. When the courts don’t apply increasingly stronger sentences to repeat offenders, the only losers are citizens and front-line police officers.

It also speaks to what can only be said is a lack of a strategy to deal with addictions at the senior levels of government. Thunder Bay is receiving a new court house currently being built in the downtown Fort William business core. The cost of that project is about $400 million. When governments can find that kind of money for a court house, but not the needed funds for a proper program to treat the growing addiction problem, it speaks volumes as to the
priorities currently set by the province.

Perhaps the next step for Thunder Bay might be building a new federal prison? It would follow in the same logic. Trying to slap those kinds of solutions over the problem won’t solve the root causes of many of the crimes.

Sarah Campbell, the Kenora MPP states, “First Nations have been asking for assistance for years but their requests have fallen on deaf ears. First Nations are citizens of this province and they’re crying out for help. Leaders in the north are terrified of what may happen if entire communities are forced to go off the drug cold turkey. Time is of the essence. When will this government release a comprehensive strategy to stop this crisis”.

The McGuinty Government must step up with a drug strategy, there must be support from the Nishnawbe Aski Nation, and from the City of Thunder Bay.

Right now it is to a point where many people simply are looking at our downtown cores as zones to avoid.

The heart of any community is the downtown core. In Thunder Bay, both downtown cores are not as healthy as they should be.

It is a situation that must be addressed.