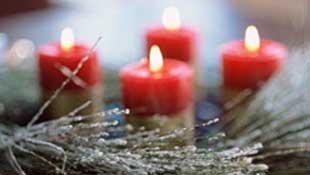 THUNDER BAY – While most people have packed away the Christmas tree, and are settling in to January, for Canadians of Ukrainian decent, Christmas is almost here. Tomorrow as the first star appears in the evening sky, Ukrainian Canadian families will gather to celebrate Christmas Eve. Sviata Vecheria (the Christmas Eve Supper) is steeped in tradition and features a humble and reverent 12-dish meal in honour of the twelve apostles spreading food for the soul throughout the world. The dishes contain no meat or dairy products to show respect for the animals that shared their place of shelter and were present for the birth of Christ. It is the climax of a six week Nativity Fast period called Pylypivka.

On Christmas Eve the traditional dinner table has a few wisps of hay under an embroidered tablecloth as a reminder of the manger in Bethlehem. A decorated sheaf of wheat or “didukh”, symbolizing the harvest, is placed in a corner of the room under an icon, with each kernel of the didukh denoting the spiritual presence of family and forebears. All are called to the table when the first star appears in the eastern evening sky.

Sviata Vecheria begins with the oldest member of the family offering guests a piece of bread dipped in honey as a sign of plenty and family unity. The supper continues with courses introduced one by one starting with kutya, which is cooked wheat sweetened with honey and dressed with poppy seeds symbolizing prosperity, peace and good health, and concluding with dessert featuring “uzvar” – a compote of stewed fruit.

Carolling begins after the Sviata Vecheria as groups of carollers go from house to house and “for a song” the hosts provide a donation to the charity the carollers have chosen. Ukrainian Christmas carols (“koliadky”) are a part of the rich Ukrainian oral tradition and through them one can trace the Ukrainian historical experience to antiquity.

“Christmas on Jan. 7 is a centuries old tradition based on the old Julian Calendar that is celebrated by both Ukrainian Orthodox and Catholic Churches,” commented Paul Grod, UCC National President. “We wish our Orthodox and Eastern-rite Catholic brethren all the best during this Christmas season.”