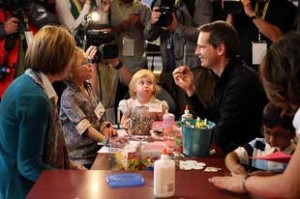 THUNDER BAY – Editorial – After the announcement from Moody’s Investors Service that the outlook on the Province of Ontario’s Aa1 issuer and debt ratings has been adjusted to negative from stable, affecting approximately CAD190 billion in debt securities, what if federal Minister of Finance James Flaherty announced that the McGuinty Government will be placed under third party management. The decision could be as a result of Ontario’s growing debt, and overall economic prospects for the province.

Now, that isn’t what would happen to a province which spent more than it brought in, or lost employment, or was generating concern from investment services over how it was managing its finances.

However that is the process that First Nations across Canada are subject. But since Ontario is not a province under the power of the Minister of Aboriginal Affairs, the truth is the federal government isn’t announcing plans to place a third party manager in place in Ontario. Such a move would likely be seen as extremely undemocratic, and would not be tolerated. Likely Canada would be plunged into a Constitutional crisis.

The federal government however can place a First Nation into third party management as outlined on the Aboriginal Affairs website. It appears that those steps are put into place when the federal Minister has concerns over finances. Attawapiskat was already under co-management when word of the housing crisis erupted onto the national media. The federal legislation on this can be found on the Justice Canada website.

The Chief of the Attawapiskat First Nation has moved to the courts to fight the move by the Minister. This is not the first time that a First Nation has attempted to fight off third party management. The Aboriginal Affairs Department states, “A TPM was appointed on December 5, 2011 to Attawapiskat First Nation. The work of Attawapiskat’s TPM supports the Department’s first priority which is to address the community’s immediate health and safety issues. The TPM will manage AANDC funding provided to the community, and support the First Nation to develop financial plans, policies, and financial and program capacity. It is also the responsibility of this TPM to ensure that AANDC-funded programs and services, including social assistance payments, continue to be delivered to the community in a timely manner”.

In terms of the timing, the AAD adds, “The current agreement between Canada and Attawapiskat’s TPM ends June 30, 2012. If a need is identified, the TPM could be extended beyond this initial timeframe. The engagement could also be shortened”.

This makes the situation appear somewhat like Chief Spence has suggested, that by complaining, and going public that the move to third party management was imposed.

Can you imagine what response Ontario Premier Dalton McGuinty would have if Ottawa were to move into our province and impose third party management? The fight in the media, and in the courts would be massive.

In Attawapiskat, the Chief is armed with commentary from the former Auditor General, one whom the Conservatives respected when she pointed out the many flaws in Liberal government programs the Conservatives opposed, as well as a growing number of facts on how the Attawapiskat First Nation was being run. The community was under co-management, and the Minister’s department was part of all of the decisions made in the community. Further, as many on the Conservative side of the political spectrum have suggested, Attawapiskat has been very open on issues in the community, their annual financial statements are posted for the world to see on their website.

The fight in Attawapiskat isn’t over, in fact it likely is only beginning. Prime Minister Harper, who has taken some progressive steps forward working toward better futures for Aboriginal Canadians, like the Residential Schools Apology, might consider over the Christmas recess for the House of Commons that often it is perception by which his government will be judged. Right now much of that perception is that he sent in an accountant to deal with a humanitarian crisis.

Likely it is on communications and dealing with the media where the Harper Government will lose this battle.