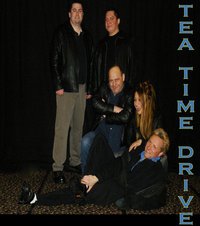 THUNDER BAY – On December 26th as many of us will be rushing through the malls returning gifts, looking for a great deal, or relaxing with friends and family; some local musicians will be giving back to the community they love.

Tina Reed, from the local band “Tea Time Drive” wanted to find a way to help Shelter House Thunder Bay. After contacting Shelter House to inquire about ways she could help, Tina was amazed at how many ways the average person could contribute. “The group at Shelter House is so great at what they do, I had no idea how I could help and they were so open to ideas and very encouraging,” said Tina.

Tina decided she would gather up some local musicians to help prepare and serve dinner at Shelter House and put on an acoustic sing–a–long after dinner.

After a few phone calls to some of her fellow musician friends, Tina had an eager group of helpers ready to pitch in.

“Tea Time Drive” along with the members of another local band “Driven” are ready for the challenge.

Tina also asked about items much needed by Shelter House Thunder Bay, and is looking for the community to assist her by donating some of the following items: mens, womens and teens under garments and personal hygiene items. Tina suggests “While out shopping this season perhaps you could throw an extra packet of socks or underwear in your cart. A small effort by many makes a tremendous difference”.

Tina said “Thunder Bay musicians are some of the most caring and giving individuals in the city; I don’t think there’s a musician out there that has toured and really lived the term starving musician. These are our fellow men and women, and especially at this time of year you come to recognize the true meaning of Christmas; compassion, love, humility, and most importantly caring for one another”.

Tina encourages those that would like to contribute by donating the needed items she mentioned, to contact her via James Murray at netnewsledger.com or by contacting Shelter House directly.