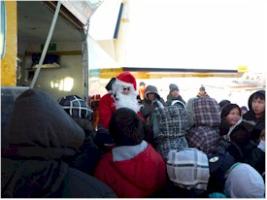 THUNDER BAY – Spreading holiday cheer in the north is one of the efforts that Wasaya Airways does annually. Wasaya Airways LP and Wasaya Weecheewaywin are starting their 2011 Santa Run. This has been an endeavour that Wasaya Airways has been honouring since 1997 and could not be done without the assistance of the “jolly old fellow” himself, Santa Claus. Santa’s arrival in the communities is a joyous time of year when he delivers bags of goodies to the children and turkeys to the households and/or community for a holiday feast.

CEO and President Tom Morris states, “this initiative is something Wasaya Airways truly looks forward to each and every year. We are very happy to spread cheer to the children and families of our valued community partners.” This year, Wasaya has and will continue to help Santa deliver over 2200 turkeys and 4000 bags of goodies December 6th, 2011 through to December 10th, 2011.

“Compared to the region, First Nation communities have a higher percentage of youth and are challenged with issues such as poverty, substance abuse, and lack of educational opportunities. As a new charity, we rely on support from socially responsible companies such as Wasaya Airways and non-profits such as the RFDA to assist us in our fight against these issues. Moving forward with this support, we’re very excited to grow, develop and address the needs of First Nation communities” says Michael Pedri, Director of Resource Development of Wasaya Weecheewaywin.