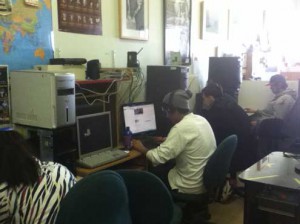 Today’s event acknowledged the positive work accomplished to date between the First Nations involved, Bell Aliant, and NAN, provided information on the positive impacts of the Initiative, and celebrated the ongoing employment opportunities. 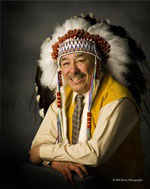 “This Initiative is a prime example that when mutually beneficial partnerships are developed between First Nations and the private and public sectors, great success can be achieved,” said NAN Grand Chief Stan Beardy. “As part of the plan to improve broadband services, First Nation communities have the opportunity to capture the economic spinoffs in terms of employment and training, preparing them for any future endeavours in NAN territory. We are very pleased with the work being done so far, and look forward to capitalizing on the benefits that will derive from having greater access to the World Wide Web.”

“Our communities and industry acknowledge that we must move forward in meaningful partnerships. Bell Aliant identifies with this important realization, and together we are moving towards ensuring the Initiative is implemented with the best possible outcome for our communities,” said COCO President Chief Gordon Beardy of Muskrat Dam First Nation. “There will be a constant need in our communities for infrastructure development and we will continue to build capacity and reinvest in ourselves.”

“This is a collaborative approach to building a backbone network that will provide these First Nation communities with enhanced and more reliable broadband services,” said Chris Bell, General Manager, Bell Aliant. “We are excited to be working closely with NAN First Nations and partnering with the provincial and federal governments. Together we are investing in technology for both today and tomorrow.”

In 2007, NAN was given a general mandate to discuss further development of the community and regional networks and infrastructure to replace the current out-dated system. In November 2010, the more than $81 million Northwestern Ontario Broadband Expansion Initiative was first announced as a joint effort between NAN First Nations, both the federal and provincial governments, and Bell Aliant to bring a state-of-the-art backbone fibre-optic network to 26 remote First Nations in Northwestern Ontario.

To date, close to 400 kilometres of the 2470 kilometre fibre build has been completed. Currently, construction is taking place in the areas of Red Lake to Poplar Hill, Ignace to Mussel White mine, and moving toward Cat Lake. The entire Initiative is expected to be completed by 2014.