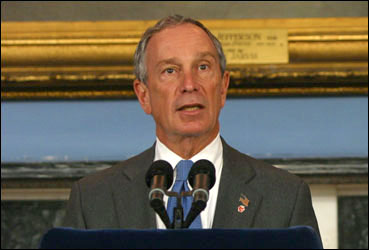 THUNDER BAY – There are over 300,000 people following the various City of New York Twitter accounts. The ‘Big Apple’ is also a hotbed of technology, and a leading centre for Internet companies. On Thursday, New York Mayor Bloomberg welcomed Twitter to New York as the company opened an office in the city.

This first ever office for Twitter is located at 340 Madison Avenue, the office will serve as the official East Coast headquarters for the company and will be home to 40 full-time employees, including engineers, designers and advertising executives, with plans to expand in the coming months.

Twitter works with countless media companies in New York City, and a growing number of start-ups that create useful business tools based on the Twitter platform and Twitter-related idea. The City of New York and @NYCMayorsOffice use Twitter to communicate with citizens, and City Twitter accounts have an aggregate following of more than 300,000. There are 54,000 people following the Mayor’s Office on Twitter.

“We are proud to welcome Twitter to New York City’s growing technology sector,” @MikeBloomberg said. “New York City has always been a place where big ideas are born, and we are working to ensure it’s the place where the next great tech success story is written – from incubating dozens of start-up ventures to bringing a new Applied Sciences school here. Companies like Twitter provide us with an important way to engage with citizens, informing and serving them in real-time.” There are over 170,000 people who follow the Mayor on Twitter

“Twitter and New York share the same constant pulse of energy,” @jack said. “We’re looking forward to growing our presence in a city that has more Twitter users than any other city in the world and is led by innovators like Mayor Bloomberg who engage, inform and serve residents in realtime.”

“It is an honor to welcome Twitter to New York City,” @RachelSterne said. “Not only is this innovative company creating jobs, but Twitter’s technology enables New York City government to serve hundreds of thousands of New Yorkers every day through crucial communication and engagement. We applaud their growth and appreciate their support of New York City’s Digital Roadmap.”

“Today’s announcement is a major win for New York City, and is further proof of the City’s growing importance in the global innovation economy,” @SethPinsky said. “New York City’s technology sector has shown tremendous growth in recent years, and Twitter now joins the expanding roster of high-tech companies that have established a presence in the five boroughs. I would like to thank Twitter for their vote of confidence in the future of New York City, and look forward to working together to expand this critical sector of our economy.”

“I’m pleased to extend a warm welcome to Twitter as they open their first office in New York,” @DanQuartNY said. “Twitter’s innovative platform has transformed the landscape on the web and I look forward to partnering with them to jobs to the city.”

Twitter is a real-time network that connects users with the latest information that they find interesting through following public streams. Twitter’s messaging is unique – allowing short bursts of information called Tweets, which are a maximum of 140 characters in length. Tweets can include embedded content and media for additional information. Twitter has grown drastically since its launch in 2006, and currently has more than 230 million tweets daily.

Currently, there are over 300,000 followers of City Twitter accounts, and over 65 City Twitter accounts are operated by the City of New York. Additionally, @NYCMayorsOffice answers questions with the hashtag #askmike, which allows individuals to pose questions to the Mayor. Twitter has partnered with the City on a number of initiatives from Engage NYC to the release of the Mayor’s Digital Roadmap. During Hurricane Irene, Mayor Bloomberg held nine press conferences over the course of five days, which were streamed online and to iPhones and iPads. During that time, @NYCMayorsOffice, which became the go-to place for real-time updates on the hurricane, more than doubled its followers, from more than 24,000 to more than 54,000.

In addition to directly creating jobs, Twitter also helps support hundreds of jobs in industries that rely on Twitter and Twitter data for their own business. Large companies and global brands, for instance, use analytic tools to derive insight from Twitter data and curation tools to identify the most relevant Tweets about a given topic. Companies also utilize customer service tools that use Twitter information to provide better and more responsive customer care. There are also thousands of Twitter developers located in New York City. Companies like SocialFlow, WiredSet, Chartbeat, Crowdtwist and DataMinr are examples of businesses that have successfully raised capital based on their work using Twitter’s APIs.

New York State features the largest developer population outside of California in the nation. The Bloomberg Administration has created nine business incubators in Manhattan, Brooklyn, Queens and the Bronx to help entrepreneurs launch new start-up companies. The City has partnered with academic institutions, property management companies and commercial landlords to establish high-quality, ready-to-use office space that comes with basic business services and administrative support. The nine incubators currently host more than 500 start-up businesses and more than 800 jobs, and many businesses have already graduated from these spaces and expanded into market-rate space.