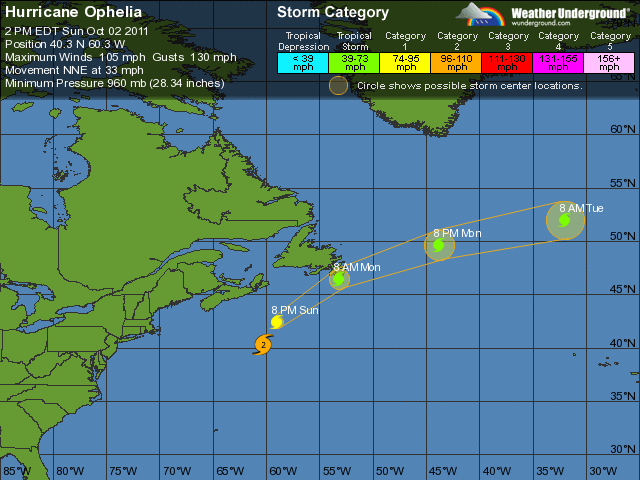 THUNDER BAY – The Avalon Pennisula of Newfoundland is under weather warnings for rain, and a tropical storm warning as Hurricane Ophelia bears down on the region. The storm is forecast to weaken from a hurricane to a post-tropical storm by the time it tracks closer to the southeastern portion of Newfoundland.

Hurricane Ophelia is forecast to transition to a post-tropical storm as it tracks south of the Avalon Peninsula early Monday morning. Ophelia will then cross the Northern Grand Banks and move out to sea Monday afternoon. This system is expected to give rain at times heavy to eastern and Southern Newfoundland starting overnight tonight with accumulations of up to 60 millimeters expected by Monday afternoon. Given the close range of hurricane Ophelia’s track to the Avalon Peninsula Monday morning, a tropical storm watch remains in effect for that region which means that there is a possibility of tropical storm force winds (60 gusting to 90 km/h) from Ophelia.

Additionally, large waves and pounding surf are expected to impact the South Coast of Newfoundland with this system with the largest waves arriving near noon Monday. Rain at times heavy associated with Ophelia is expected to develop overnight with up to 60 millimeters expected by Monday afternoon.

From the Canadian Hurricane Centre:

About 450 kilometres south of Sable Island.

Ophelia has begun to weaken as it moves toward an environment that will lead to rapid weakening. A frontal zone from Southern Newfoundland to south of Yarmouth will drift northward tonight with occasional downpours associated with it. Rain from Ophelia may reach Cape Breton tonight then affect Southeastern Newfoundland Monday morning.

Computer models are still showing different scenarios for Ophelia’s track – ranging from the Burin Peninsula in Newfoundland to 100 kilometres south of the Avalon.

Greatest chance for strong winds from Ophelia is over Southeastern Newfoundland. There is about a 70% chance of tropical storm Force winds over the Avalon Peninsula, hence the tropical storm watch has been maintained. Tropical storm force winds are approximately 60 gusting to 90 km/h. Chance of hurricane-force gusts (120 km/h) in this area remains low at 5-10%.

Rainfall warnings have been issued for Southeastern Newfoundland.

The fore-mentionned frontal system over the Maritimes could tap in to some of Ophelia’s moisture tonight and into Monday giving the possibility of heavy rainfall over Eastern Nova Scotia especially Cape Breton. Rainfall directly from Ophelia is expected over Eastern Newfoundland beginning early Monday morning. Expect a 4 to 6 hour period of heavy rainfall over these regions Monday morning. 40 to 60 millimetres with locally up to 75 millimetres is possible with rainfall rates up to 20 millimetres/hour.

Incident swell height of 3 metres breaking in the 4-metre (10-14-foot) range is possible late tonight along the Atlantic coast of Nova Scotia. With regard to storm surge, 40 to 60 cm is possible Monday morning around the Avalon and Burin peninsulas. This should not pose significant problems but a farther-north track would
necessitate an increase in forecast water levels. The centre of post-tropical Ophelia is forecast to arrive before the early afternoon high tide.

Hurricane force wind warnings are in effect for southeastern Maritimes marine areas near and to the right of Ophelia’s track. Gale or storm warnings are in effect for adjacent areas and portions of the Grand Banks and Eastern Newfoundland waters. Ophelia’s wind field is relatively compact with its strongest winds confined very close to its center.

Large waves are expected in the offshore – especially to the right (southeast) and close to Ophelia’s track as it moves into Canadian waters. Greatest threat for large waves is over Laurentian Fan and Grand Banks where wave heights of 10 metres or more are possible.