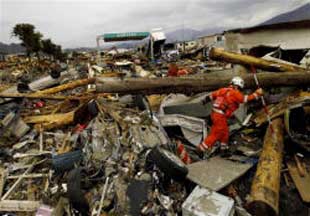 The massive disaster has also shifted attitudes in Japan.

A survey carried out by members of the Soka Gakkai student division in the Tohoku region of northern Japan shows significant shifts in young people’s attitudes since the March 11, 2011, “triple disaster” of earthquake, tsunami and nuclear accident.

In a survey of over 500 students at a total of 47 universities and vocational schools in Miyagi, Fukushima and Iwate (the three most directly affected prefectures), as well as Aomori, Akita and Yamagata, respondents stated that their views on the purpose of work, on nuclear power, and the importance of helping others had changed.
When seeking employment, the students’ key purpose had previously been earning money (23.2%). Now it is reported to be “helping others” (18.8%) and “attaining a stable life” (17.7%). Many also indicated that their motivation is now for the sake of the community (16.8%).

When asked on what issues their views had changed, 19.9% of respondents stated that their views on nuclear power had changed (this figure was higher, at 23%, among students from the affected areas), 18.1% indicated a shift in their perspective on the importance of helping others and 17.7% a change in their appreciation for the basics of daily life such as shelter, food and clothing.

When asked if they identified any positive outcome of the March 11 disaster, 45% mentioned the strengthening of links between people. In terms of lessons they had learned, 34.2% stressed the need for disaster preparedness and 21.1% highlighted the importance of caring for others.

To a question about the characteristics of their ideal society, 38.2% identified a society where people can trust and rely on each other.

Hironobu Nakamura, Soka Gakkai Tohoku student division leader, comments, “Many of our student members have been helping out with relief efforts. They wanted through this survey to listen to and broadcast the voices of their peers. Before the disaster many people were commenting on the lack of human connections in Japanese society. The results clearly indicate how much people value these connections now.”

Professor Toshiaki Muramoto of the Tohoku University Graduate School of Information Sciences, who helped design and supervise the survey, comments, “This is an important survey, and rare in that the students initiated it themselves. Through this disaster, people have learned the importance of trusting and relying on each other. I feel this is extremely important for the future of Japanese society.”