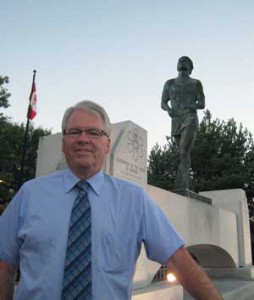 THUNDER BAY – Like so many others in Canada and around the world, in the spring of 1980 I was absolutely captivated by the courage of a young man named Terry Fox, running across Canada. As fate would have it, I watched him run on Highway 11-17 and saw him collapse. Little did I know then that his fight against cancer would impact me in a very personal way later in life.

At the age of just 18, Terry Fox was diagnosed with osteosarcoma, a form of cancer that often starts near the knees. Losing his leg must have been very difficult for a young varsity basketball player like Terry, but his tenacity and positive outlook carried him through sixteen months of chemotherapy, and his undiminished passion for the sport led him to win three national championships with Rick Hanson’s wheelchair basketball team.

While undergoing extensive treatment in cancer clinics, Fox was struck with the plight of his fellow cancer patients, saying “There were faces with the brave smiles, and the ones who had given up smiling. There were feelings of hopeful denial, and the feelings of despair. My quest would not be a selfish one. I could not leave knowing these faces and feelings would still exist, even though I would be set free from mine. Somewhere the hurting must stop… and I was determined to take myself to the limit for this cause.”

Terry Fox had decided to run across Canada to raise funds for cancer research, something he felt was desperately needed if the disease was ever to be beaten. So on April 12, 1980 he dipped his artificial leg in the Atlantic near St John’s, Newfoundland, to little public attention. By the time he arrived here in Northwestern Ontario, he was known across the country.

Sadly, the cancer spread to his lungs and after 5,373 kilometres, he was forced to end his run just outside Thunder Bay. In less than a year, he would be gone. Terry had hoped to raise $1 for every one of Canada’s 24 million people at the time. Today, of course, he has helped raise far more in Canada and over 60 countries around the world where his marathons inspired by him are now run.

In the years that followed his death, thanks to research and improved treatment funded by Terry’s Marathon of Hope and runs that followed, countless people stricken with cancer have successfully beat the disease. I count myself as one of them. In 2009 I was diagnosed with cancer, and it was one of the most difficult challenges I’ve ever faced in my life. But thanks to new treatments I fully overcame the disease. I count myself very lucky …and I am immensely grateful to Terry’s monumental effort and sacrifices.

Not everyone is as fortunate. Recently, a good friend of mine was struck down by cancer in the prime of his life. Amongst the last words Jack Layton wrote was a message to fellow Canadians with cancer:

“To other Canadians who are on journeys to defeat cancer and to live their lives, I say this: please don’t be discouraged that my own journey hasn’t gone as well as I had hoped. You must not lose your own hope. Treatments and therapies have never been better in the face of this disease. You have every reason to be optimistic, determined, and focused on the future. My only other advice is to cherish every moment with those you love at every stage of your journey, as I have done.”

I knew Jack as optimistic and full of hope, even in the face of cancer. It’s a hope that many more of us can share thanks to Terry’s marathon and the advances it has brought about. So to those running in this year’s Terry Fox Run: Thank You. Your support means the world to countless cancer patients and survivors.

This year’s 5km Thunder Bay Terry Fox Run will be held at 2:00pm on Sunday, September 18 (starting from St. Ignatius High School), preceded by the Thunder Bay Marathon at 8:00am.