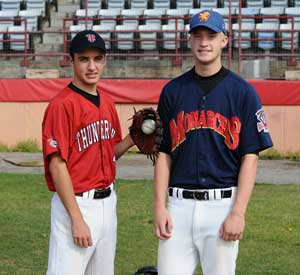 Since 1951, when Port Arthur Stadium opened, baseball has been a fixture at this park. Baseball Canada’s online contest to decide ‘Canada’s Favourite Ballpark’ is going down to the wire this weekend with Port Arthur Stadium in a tight battle with London’s Labatt Park trailing by only a slim margin for the national title. There is only one vote allowed per computing device. However, people should note that they can vote on every device that they can connect to the web with. That includes Ipads, Iphones, Blackberrys, laptops and desktops from home or work.

Over the past weeks, as Port Arthur Stadium has climbed in the rankings, many residents are reminising about the park and their favourite memories. From Opening Night when Bill Butuk shares that “Pop was either 5 cents for those small coke bottles or 10 cents. Popcorn in those days was ten cents”.

The Baseball Canada vote has many people remembering their favourite times at the stadium. Larry Hebert remembers “when the pro team from the St. Louis Browns organization arrived to play in a three game series starting July 16. 1951, they were short players and picked up some locals such as Rudy Migay”. Hebert shared how while he was talking with friends while shopping about Migay, and “Lo and behold who shows up at the end of the aisle we were standing in but Rudy Migay”.

Voting ends on Tuesday at noon. Right now Baseball Canada is reporting that London Ontario has a slight lead on Thunder Bay. “As of 4pm Friday, London continues to hold an ever so slight edge over Thunder Bay. Voting ends September 6th at 10AM ET. Hey folks, we can still to this. Never, say never!” enthuses Philps.

To cast your vote and put Port Arthur Stadium over the top go to www.baseball.ca.

PHOTO: Mike Moskalyk wearing a Thunder Bay Bordercats Jersey tags out a London Monarch in a mock up at Port Arthur Stadium