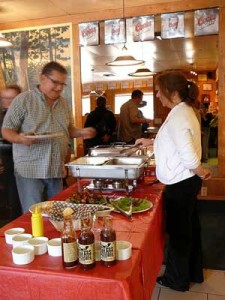 If you are a fan of the Food Network and the show “Diners, Drive-ins and Dives” you will soon be seeing Busters featured on “You Gotta Eat Here” which is a Canadian version of the popular American show.

Natalie Welniak stated, “What an amazing shoot!! We had a blast with the crew of ‘You’ve Gotta Eat Here!'”

Located at the West End of Vermilion Bay on Highway 17, Busters Barbeque is the only Award-Winning barbecue restaurant on the TransCanada Highway. “We serve traditional regional southern barbecue with a Canadian twist. Stop by to enjoy our Award-Winning Kansas City style ribs, slow smoked Texas style brisket, Canadian pulled pork or our southern smoked chicken”.

The ‘secret’ ingredient for the award winning sauce is a Northwestern Ontario favourite, blueberries.

The Food Network Canada crew were onsite at Busters on Thursday and Friday. The episode will be aired in the future.

To keep up on “You Gotta Eat Here“.

The Blueberry – Super Fruit for Health

Blueberries – A Cup a Day Key for Health