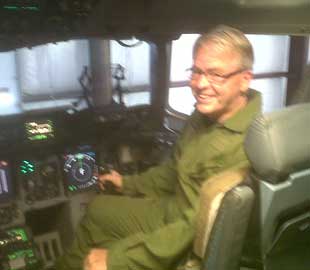 THUNDER BAY – Thunder Bay-Superior North MP Bruce Hyer joined Canadian Forces personnel for training at CFB Trenton this week. Hyer was participating as part of a program for a limited number of parliamentarians to gain a better understanding of Canada’s military. “It’s a real honour – and a real eye-opener – to be training here at 8 Wing Trenton with the Royal Canadian Air Force,” said Hyer on his third day of training. “As a former bush pilot, I was especially eager to have the opportunity to go up in some of the aircraft, and learn from the flight crews.”

Hyer flew in a CH-146 Griffon helicopter, a CC-177 Globemaster, and piloted a CC-130 Hercules heavy transport in simulator. But the training wasn’t all about flying aircraft.

“Seeing the base and touring air traffic control really showed the top shape our Canadian Forces personnel keep their facilities and equipment in,” noted Hyer. “But it was meeting and talking with those personnel that was the really valuable part of the experience. The professionalism and dedication of our personnel is immediately evident, including the ground crews and support personnel.”

CFB Trenton is responsible for search and rescue in central Canada and its tactical transport capabilities have made it the hub for virtually all Canadian Forces military air transport operations. 8 Wing’s duties range from delivering supplies to the high Arctic to airlifting troops and equipment worldwide. CFB Trenton also had the duty of welcoming home the flag-draped casket of every Canadian soldier killed in Afghanistan.

“Being here has been invaluable in gaining a better understanding of Canada’s armed services, and for me to speak to personnel first-hand,” said Hyer. “It’s unfortunate, but Parliament is sometimes called upon to make decisions that can put our service men and women in harm’s way. So any experience that lets MPs walk a mile in their boots, and get a better understanding of what our service personnel go through, is something that I recommend most MPs do.”