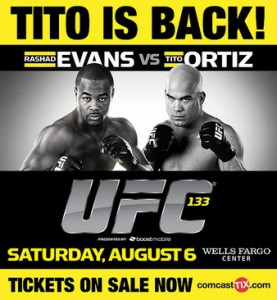 THUNDER BAY – The UFC is hosting a major event this weekend in Philadelphia. A city with a long history of fighting will be the host for UFC 133. UFC 133 has, as its main events, a light heavyweight match between Rashad Evans and Tito Ortiz, along with a middleweight battle between Vitor Belfort and Yoshihiro Akiyama.

The event will come to you live from the Wells Fargo Center in Philadelphia. You can tune in only on Pay-Per-View.

Here is the event line-up:

*Pace has agreed to fight Menjivar at 138 pounds