THUNDER BAY – More help is on the way to fight fires across Northwestern Ontario. Earlier today the Ontario Government decided not to call for a State of Emergency in the region over the fire hazard. There are 109 fires burning in Ontario right now. Those fires cover an area of 400,000 ha. This is a massive increase in lands impacted by fire over last year when only 15,000 ha were burnt.

The rain in the region overnight has brought some temporary relief, however to extinquish fires it would take a vastly larger amount of rain. However some of the larger fires are slowing in the rate they were growing. Those fires are still producing a lot of smoke and that is presenting a continued hazard to both fire fighters and communities.

The province of British Columbia will send an additional 74 forest fire personnel to Ontario to assist with a continuing increase in fire activity. That includes one incident management team, 11 initial attack crews and 20 single resources will depart Thursday. This will bring the total number to 533 B.C. personnel working in Ontario. British Columbia is experiencing the slowest fire season start in the last decade, allowing the Wildfire Management Branch to lend over 1,500 personnel to other provinces so far this year.

Costs for a deployment will be covered by the Ontario government under the Mutual Aid Resources Sharing Agreement, which allows sharing of firefighting resources across Canada. Sufficient crews will remain in B.C. should fire activity increase. The Wildfire Management Branch always maintains adequate firefighting capacity to respond to current conditions.

As evacuations continue, here is a list of the communities evacuated or partially evacuated:

For the latest fire conditions, click on the Fire Map on the top menu. 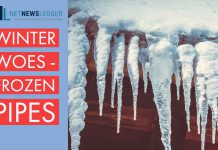 Frigid Arctic Weather Can Freeze Waterlines in Your Home