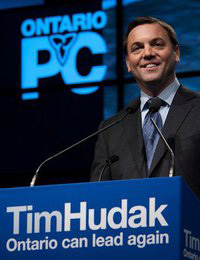 THUNDER BAY – News – Progressive Conservative Leader Tim Hudak is in Thunder Bay today to address the Chamber of Commerce. If the PC leader seems a little happy while it Thunder Bay, it could be as a result of the latest Ipsos Reid poll. The latest results are showing that the Ontario PCs are widening their lead over the governing Liberals.

Ipsos Reid is also showing the PCs are leading the Liberals in Northern Ontario. The poll shows the PCs hold the support of 45% of voters, with the New Democrats in second place with 30% and the Liberals trailing in third place with 25% support. 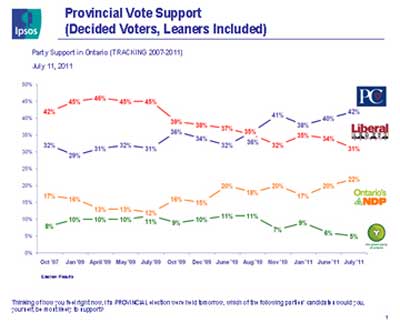 While the gap between the PCs and Liberals has risen from 6 points to 11 points in the last month, Hudak’s gains have been exclusively outside of the GTA, where his party is already the dominant force. In fact, in many regions outside of the GTA, the Liberals are being threatened by a bolstered NDP. Inside the GTA, Premier McGuinty continues to hold on to a small lead – just 2 points – which is, statistically speaking, a tie and within the poll’s margin of error.