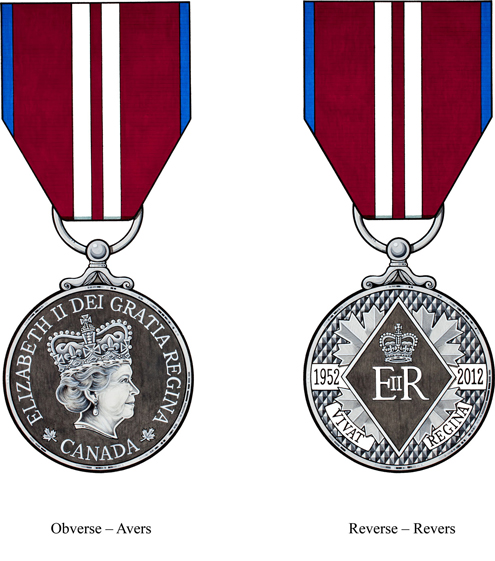 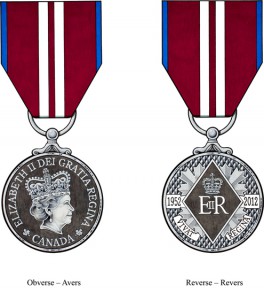 THUNDER BAY – Do you know of someone who has gone above and beyond? Maybe that person should be eligible for some recognition.

The medal will commemorate the 60th anniversary of accession to the throne of Her Majesty Queen Elizabeth II as Queen of Canada, and pay homage to her six decades of service and commitment to our country. In 2012, during the year of celebrations, 60 000 deserving Canadians will be recognized for their contributions to Canada or to a particular province, territory or community, or for their outstanding achievement abroad that has brought great credit to our country.

They must also be a citizen or permanent resident of Canada. As well, this medal can be awarded posthumously as long as the recipient is alive on February 6, 2012, the date of the 60th anniversary of The Queen’s accession to the Throne.

The creation of the Queen Elizabeth II Diamond Jubilee Medal was announced by His Excellency on February 3, 2011, in the presence of the Right Honourable Stephen Harper, Prime Minister of Canada. On this occasion, the design of the medal, created by the Canadian Heraldic Authority and approved by The Queen, was unveiled at Rideau Hall. The medal will be manufactured by the Royal Canadian Mint.

Background information on the Diamond Jubilee Medal, including eligibility criteria, is attached. The artistic rendering of the medal, as well as additional information are available at www.gg.ca/diamondjubilee.

Backgrounder: A new commemorative medal has been created to mark the 2012 celebrations of the 60th anniversary of Her Majesty Queen Elizabeth II accession to the Throne. The Queen Elizabeth II Diamond Jubilee Medal will be a tangible way for Canada to honour Her Majesty for her service to this country. At the same time, it will serve to honour contributions and achievements made by Canadians, who represent the full breadth of our society.

During the year of celebrations, 60 000 deserving Canadians will be recognized. The inaugural presentation ceremony of the Diamond Jubilee Medal will take place in 2012.

The Chancellery of Honours, as part of the Office of the Secretary to the Governor General, will administer the Queen Elizabeth II Diamond Jubilee Medal program.

have made significant contributions to Canada or to a particular province, territory, region or community within Canada, or for an outstanding achievement abroad that has brought great credit to Canada;

be citizens or permanent residents of Canada;

be alive on February 6, 2012. The award can be made posthumously, as long as the candidate was alive on that date.

Information on the nomination process will be announced at a later date.

The obverse depicts a crowned image of the Sovereign, in whose name the medal is bestowed. The reverse marks the sixtieth, or diamond, anniversary of the accession to the Throne of Her Majesty Queen Elizabeth II. The anniversary is expressed by the central diamond shape, by the background composed of a pattern of diamonds, and by the two dates. The Royal Cypher consists of the Royal Crown above the letters EIIR (i.e., Elizabeth II Regina, the latter word meaning Queen in Latin). The maple leaves refer to Canada, while the motto VIVAT REGINA means “Long live The Queen!”

The ribbon uses a new arrangement of the blue, red and white colours found in the 1953 Coronation Medal, the 1977 Silver Jubilee Medal, and the 2002 Golden Jubilee Medal.

The design of the Diamond Jubilee Medal was created by the Canadian Heraldic Authority.

The medal will be manufactured by the Royal Canadian Mint at their Ottawa facility. For more information, please visit www.mint.ca.