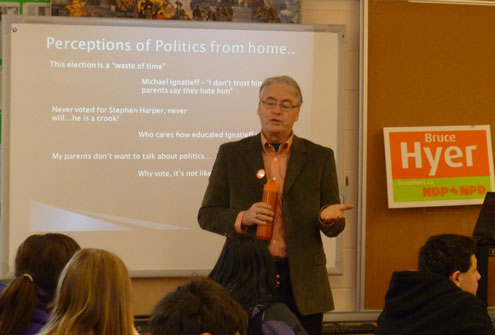 MARATHON – Voter apathy has been a highly discussed and publicized issue so far in this election. Federally, only 58.8% of Canadian voters turned out to the polls on Election Day, the lowest in Canadian history.

These low turnout rates and a perceived disengagement of the electorate is being blamed on the youth aged 18 – 21 who, according to Elections Canada data, are almost non-existent at the polls on Election Day.

While some politicians see that as a sign to focus their campaign energies on the population that they know will cast a ballot; local candidates took time out of their busy schedules this week to visit the Grade Eight classroom at Holy Saviour School in Marathon to attempt to battle ongoing voter apathy amongst youth by engaging future voters.

These 1 3 – 14 year olds have been involved in the election every step of the way from watching the Commons vote to bring down the Harper Government live in class to holding a mock election of their own at the end of April through Student Vote.

The students in Dean Burke’s Grade Eight class were visited by three of the four local candidates for Thunder Bay – Superior North (Liberal candidate Yves Fricot will be visiting later in the campaign). Each candidate came in, spoke with students about their party, their plans, and their beliefs. Then the students were given the floor to ask questions of their own.

Students from Grades 5, 7 and 8 questioned NDP candidate Bruce Hyer about his party’s plan to reduce the federal deficit.

Scot Kyle of the Green Party, a former teacher himself, gave a lesson to students on some of the big environmental terminology his party uses, and fielded questions about the lack of specifics in the party’s plans to date.

After the Q & A, students spoke one-on-one with the candidates, shook their hands, took autographs, and continued some very spirited and thoughtful discussions about Canadian politics.

This was the first experience for these students with politicians, and it has most certainly left a mark and inspired them to become advocates of a participative and healthy democracy. Holy Saviour School’s Grade Eight class will be running their school-wide Student Vote day on Thursday, April 28, 2011.