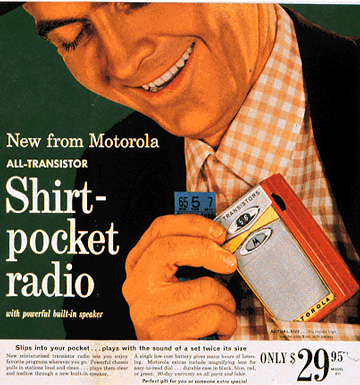 THUNDER BAY – Over the past several weeks, a number of people have implored me to change radio stations. Those people have been prodding me to check out The Giant FM 103.5. Last week, I finally decided to try the station out.

All I can say is wow.

The station offers a solid mix of music with favourites from across the generations.

Over the weekend, it was almost like someone at the station had downloaded the playlist from my Itouch and put it on the air.

Over the decades, I have always been an ardent radio listener. Radio has also played a part, in the past in covering news and information on a timely manner.

As an elementary school student in Winnipeg, I can still remember teachers with their transistor radios at their desks on a very sad day in 1968. Senator Robert Kennedy had won the Democratic Primary the night before in California. Leaving the hall the young Senator from New York was shot.

Through the following day, teachers had their radios tuned to CJOB radio in Winnipeg to keep up on the news about the Senator.

During my teens in Thunder Bay, radio continued to be a part of my life. I remember my first morning in our city. 580 CKPR radio was on. Rick Smith was doing the news. The first story was an interview with then Mayor Walter Assef.

The first item was the Mayor suggesting that “each child should have a pony”, Mayor Assef thought that would help teach responsibility to young people.

The second item was Mayor Assef suggesting that everyone put a couple of full one litre pop bottles into their toilet tanks to save water.

Perhaps “Jolly Wally” as he was known was simply ahead of his time. Today having more responsibilities for youth, and conserving water are still hot topics.

Radio’s history in Thunder Bay is rich with history.

Over time I found that my AM radio dial would also bring in an incredible selection of stations from across the eastern United States. It was like Lake Superior was a giant antenna.

Back in the day, WLS in Chicago was one of the top rock stations and would come in really clearly at night in Thunder Bay. It still does, however today, WLS is a talk radio station.

I remember too being able to tune in Larry King on the radio from a New York station. This of course was long before Larry King hit the CNN television network.

Right now, in Thunder Bay, it appears that there will be a looming battle for radio listeners. From the talk on the street, The Giant FM is gaining listeners. For me, it has become my new favourite. That of course is not to put down any of the stations in our city. Thunder Bay is home to some very talented people who grace our radio airwaves.

The Giant FM did not top the BBM ratings last time out, however if they keep going the way they are, the battle for top spot will be a hard fought fight.

Solid competition for your radio listening time will only serve as a benefit for all radio listeners in our city.