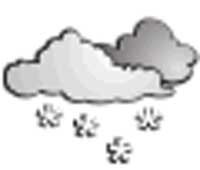 For Thunder Bay the weather service is calling for up to five centimetres of snow, with winds becoming north 20 km/h late this evening. The low tonight is forecast for minus 8c.

A very moist airmass has resulted in local near zero visibilities in fog this morning for regions east of Lake Superior toward the Québec border including the Nickel Belt.  The fog should dissipate later this afternoon.

Yet another low pressure system currently over the Central United States will move northeast towards Lake Superior tonight.

Current indications suggest that a general snowfall of 10 to as much  as 15 centimetres will occur in the regions north and west of Wawa. A snowfall warning is not expected at this point as the condition of receiving 15 centimetres in 12 hours appears unlikely.

For areas northeast of Lake Superior from Wawa to Kapuskasing to North of Timmins..Slightly lesser amounts of snow are expected. However there is a risk of freezing rain creating icy conditions tonight into Tuesday morning.  The city of Timmins itself looks to escape both the snow and the freezing rain as temperatures will likely remain above zero as the storm tracks northeastward.