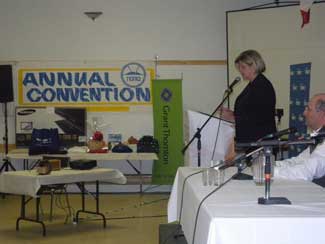 Here is the text of Ms. Horwath’s remarks from the Hansard of the Ontario Legislature:

Ms. Andrea Horwath: I think the thing that’s most clear about this fall economic statement is that this Premier and this government are scrambling. After permanently raising the cost of electricity with private power deals, not-so-smart meters and all kinds of other schemes, on top of which is the salt in the wound, the HST—

The Speaker (Hon. Steve Peters): Stop the clock. The Minister of Finance will withdraw the comment, please.

Ms. Andrea Horwath: —on top of which is the salt in the wound, the HST on the hydro bills, Premier Dalton McGuinty offers in this economic statement a temporary solution for struggling families.

Now, we absolutely support any move that makes life better for families. In fact, we have been pleading, we have been urging this government to finally take some action to give families a bit of a break. But this is not about that; this is not about helping families with their bills. What it is about, though, is solving the Premier’s problems until the next election rolls around in about a year.

People are hurting. Every single day since September, New Democrats have been coming in this Legislature, bringing the stories of those families to the feet of this Premier—every single day. They have been telling us through all kinds of different methods that they just can’t take it anymore, that their hydro bills are off the Richter scale and they cannot make ends meet. Families like Helen Crabbe’s, who I mentioned in the House today. She wrote us an email that basically said, “Please help us!” Help us by taking the HST off of hydro.

The Speaker (Hon. Steve Peters): I remind the honourable member about the use of names.

Ms. Andrea Horwath: In fact, only in Premier Dalton McGuinty’s Ontario are people literally afraid of opening their next hydro bill.

After promising a big boom with the HST, nothing happened. The HST was going to solve all the province’s problems. Nothing happened. In fact, no more jobs have been created in this province. The economy is still struggling significantly, as the finance minister’s own documents indicate.

We launched our campaign in September and we had thousands upon thousands of people engaging with us immediately in trying to get this government to do the right thing. Sixty thousand petitions were signed in a matter of about six weeks. We held meetings with people around this province. We listened to what they had to say. We tweeted with them. We received their petitions and their emails. While people across the province are experiencing permanent hikes to their hydro bills, permanent HST on top of those hikes in their hydro bills and their prices keep climbing and climbing, what do we have? We have a plan that the government admits quite clearly they’re just going to phase out. We don’t really know if they’re going to keep their promise about a five-year phase-out plan, but they’re definitely going to phase out the plan.

What’s not getting phased out, though, is the HST. The HST is going to be there forever, rubbing salt in the wounds of those hydro bills, which this government projects are going to go up considerably—46% in just the next couple of years, and then continue to climb after that. Then what do we end up with? HST on top of those bills as well. The price hikes are still going to be there.

We’ve seen the McGuinty Liberals promise relief before to the people of this province. In 2003, in fact, he joined Ernie Eves in a promise for a five-year rate freeze on the hydro rates. What happened to that promise? Months after that promise was made, it was scrapped by this government. So I think the people of Ontario know this government very well and they are not prepared to accept that this next promise is one that will actually be kept by the Premier of Ontario.

I don’t want to omit commenting on the Teranet deal that this government has announced in their fall economic statement, a 50-year private sector deal. I think we should have learned in this province that we’ve seen this movie one too many times. Over and over again it plays. The fire sale of the 407 helped the government of the day perhaps, but it’s still burning Ontarians day in and day out. An immediate cash grab for a long-term lack of benefit for the people of this province is no deal for anybody.