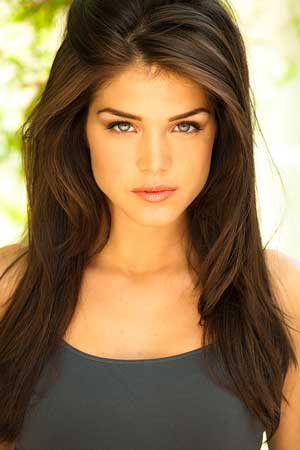 Her IMDB bio states, “While studying broadcast journalism in Ontario, a friend alerted her to a casting call in Vancouver for a clothing commercial which was looking for drummers. After leaving her small town, the opportunity landed her an agent and after appearing in various national commercials she caught the eye of director Chris Columbus (Harry Potter, Rent) who hired the budding actor in her first feature role for “I Love You, Beth Cooper”.

Although her thriving career has garnered her a lot of attention as of late, Marie continues to prove that she hasn’t forgotten her small town roots, often riding her motorcycle and playing with her 100lb bull-mastiff in the rugged west coast wilderness when she’s not on set. Marie splits her time between Vancouver and Los Angeles.”

The short description of “Hunt to Kill”; When Jim’s (Stone Cold Steve Austin) teenage daughter Kim is kidnapped (Marie Avgeropoulos) he’s forced to lead a band of ruthless killers into the wilderness to retrieve their share of a missing heist score. In order to rescue his daughter, Jim must use his unique brand of survival skills to outsmart the kidnappers before it’s too late. HUNT TO KILL is an action packed adrenaline rush about a man operating on his most primal instincts to save the one thing he’s willing to die for – his daughter.

Hunt to Kill available on blue ray and dvd now! The movie is in all local Blockbuster video stores for rent, or for sale in retail stores.