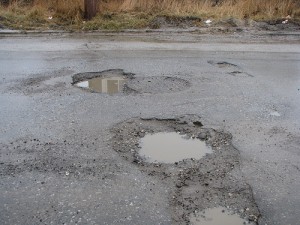 THUNDER BAY – Whether they travel by car, truck, bus or bike, residents of Thunder Bay can name at least one road they dread taking each day. Aiming to put power into the hands of the road users, representatives from CAA North & East Ontario (CAANEO) were at One Stop Lube Shop today to encourage residents to voice their concerns and frustrations for substandard infrastructure by voting for Ontario’s worst roads.

“The price of the damages to vehicles, the environment and road user safety caused by Ontario’s crumbling roads, bridges and highways is unacceptable,” said Korey Kennedy, Manager of Public & Government Affairs for CAANEO.  “We are once again calling on Thunder Bay’s road-users to make their voices heard by voting for Ontario’s worst road.”

With the theme ‘It’s in your hands’, this year’s Worst Roads campaign reiterates to members of the public the importance of telling their local politicians that they want to see improvements to crumbling and decaying infrastructure in their respective communities. Now in its eighth year, the campaign has already made a significant difference towards repairs on roadways, having helped generate $400 million for
infrastructure projects from the province and $1.9 billion from the federal government.

Additionally, since the inception of the campaign back in 2003, more than 90 per cent of the roads that have made the annual Top 20 list have been or are in the midst of being repaired.

“We commend the senior levels of government for providing municipalities with additional funds and resources to assist in the repair and maintenance of Ontario’s roads, bridges and highways,” said Kennedy.  “Now it’s up to municipal governments to ensure that our roads are not only fixed, but are kept in pristine shape. Motorists and other road-users can do their part by speaking up about this extremely important issue.”

What constitutes a worst road is up to the voters – be it a side street riddled with cracks, a major road that is laced with potholes, a bridge that is crumbling, or a highway that is continuously congested.

Road users can have their say by casting a ballot at one of the eight CAANEO Travel Stores, or by going online to www.caaneo.ca/worstroads by September 30, 2010.