Home Politics “If the measure of a national leader is the ability to bridge... 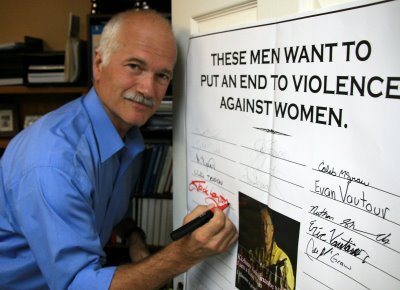 OTTAWA – If the measure of a national leader is the ability to bridge divides among citizens, our prime minister fails that standard. I have a very clear example: the ongoing debate over the long-gun registry. This country, truly, is divided. There is no consensus.

As the Leader of the New Democratic Party, I have listened closely to the frustration of rural Canadians. I have heard the anger.

I’ve heard from countless gun-owners who say the registry treats them like criminals. Discounts their way of life … their regional roots. I’ve heard from Canadians who hate what the registry seems to represent — another city-driven idea that forgot rural reality. I’ve spoken to First Nations hunters who resent hearing they should “just get over it” and register their rifles. They talk about respect, and treaty rights, and slippery slopes.

In my own riding of Toronto-Danforth, I’ve heard from frontline advocates for women escaping domestic violence. Many agree the way the registry was implemented was deeply flawed, but they ask a compelling question: Shouldn’t we Canadians do anything in our power that might reduce gun violence?

I hear that view too. I share it. Stopping gun violence has been a priority for me through three decades of public life.

Mr. Harper has been no help at all. Instead of driving for solutions, he has used this issue to drive wedges between Canadians. Instead of reaching out, his party is running radio ads vilifying urban registry supporters as the enemy. They’re stoking resentments as a fundraising tool to fill their election war chest. Mr. Harper is pitting Canadian region against Canadian region with his “all or nothing show-down”. This is un-Canadian.

This kind of divisiveness, pitting one group against another is the poisonous politics of the United States. Not the nation -building politics of Canada. This Conservative Government is simply dishonest with the public about the long gun registry. Removing a high-ranked RCMP officer who insists maintaining the registry will save lives, and hide an objective report that proves it, are all political games unworthy of a democratic government.

As for Mr. Ignatieff, I no longer see him trying to build solutions. He’s saying, “just wait until we’re in office — then we’ll address those rural concerns.” But Liberal MPs are Parliamentarians now. Not Parliamentarians in waiting. They need to act now.

We can do better. New Democrats want to bring people together instead of driving them apart. This drive is rooted in our DNA.

Let me speak directly to rural and northern Canadians: We will not abandon you. Certainly we will never abandon you to Stephen Harper’s offensive stereotype that rural priorities begin and end with guns.

The fact is that rural Canada has been ignored for too long. That’s why New Democrats are fighting for a full breadth of rural and northern priorities.

On the gun registry, you’ve asked us to do better. You’ve asked us to strengthen gun control in ways that respect your concerns. I’ll be clear: If Bill C-391 stands unamended, I will vote against it — in no small part because it pits Canadians against each other.

I am the Leader of a party that respects MPs prerogatives to vote freely on private members bills. I worked tirelessly to convince MPs to vote against C-391 in order to maintain the registry to better protect public safety.” My rural and urban caucuses have worked hard to find ways, that we as a party, can find a path through this divisive issue. But my priority is to find a solution that works for all Canadians.

And that is why today I am announcing ….when Parliament returns, New Democrats will introduce legislation to address legitimate complaints about the long-gun registry and strengthen gun control:

Penalties for non-registration should start as non-criminal fines.

I am also announcing we’re proposing legislation empowering municipalities to ban handguns from their streets, if their citizens choose that. And we’re proposing a system to identify threats early — by sharing mental health information between the Firearms program, law enforcement and military agencies – legislation that addresses the system failures which may have prevented the Dawson tragedy.

I am calling on Stephen Harper to work with us to help unite Canadians behind fighting gun violence. I am calling on Mr. Ignatieff and Mr. Duceppe as well — don’t ask rural Canadians to put their concerns aside. The registry is no sacred idol; we can improve it.

There’s no good reason why Parliament shouldn’t be able to forge a solution that brings everyone together. Instead of all or nothing brinksmanship that divides Canadians – let’s build bridges between urban and rural Canada that puts public safety first.