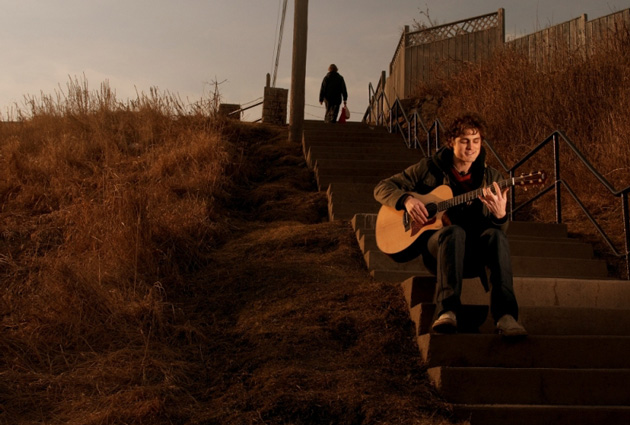 THUNDER BAY – “Fame isn’t the entirety of the goal. Spreading the good word and motivating people to be their best by my words and more importantly my actions is what I want to do,” states Trevor Potts.

Trevor Potts is a singer for “Last Night”, a band that has played numerous venues locally in Thunder Bay. In addition, the band also taken their music on the road recently, with successful events from Ottawa to Toronto, where they realized many new fans with their music.

Trevor will soon begin the adventure of a lifetime for an up and coming musician.

He will be recording a solo album at Omega Studios in Rockville, Md., a studio rich with a history of recording artists like Jimi Hendrix, Sarah McLachlan and many more.
Corporate Sponsor, Dickie Metal Products and Herbert Christopher Talent Management & Promotion, both of Amherst, VA, have also been involved in spearheading the southern sessions.

Potts also has plans to play shows in the DC and Virginia area with seasoned musicians, Cindy Hall, Jeff Bryant, Tommy Bryant, Christopher Helms, and Sarah Bruguiere. These talented players have played with the likes of Stevie Wonder, George Jones, Phil Vassar and Hank Williams Jr. before hopping across the pond to England for three weeks of touring.

Matt Popowich of Westfort Films will be joining Potts on this adventure. Popowich’s video “My Home Town” was made famous via YouTube, the same video that garnered much attention from recording companies, including an offer from EMI and Live Nation. Popowich will travel with Potts, with an HD camera, shooting anything and everything throughout the month. The idea is to capture the life of an “up-and-coming” musician in new and inspiring environments with nothing but a backpack and a guitar.

Potts says “They have shows planned but there are open gaps in the itinerary to capture some street-music footage and enjoy some travel, too, but the crux of the project is to go overseas with about a show every second day planned…that’s it. No hotels and even limited hostels as they plan on couch surfing and revealing the charm that backpacking as a musician and as a human being offer”.

This is as indie as indie gets because the whole thing was ‘planned’ by Potts.

“We’re excited to see what we can capture on this venture.”

When he returns from recording and touring, Potts says he will continue his work in Thunder Bay…”September and beyond will hold something wonderful, I’m sure. I plan to work more in the US and hopefully write and record another Last Night album by the end of 2010. In my spare time I’ll be in the lab at “Dining Room Studios” making music or down at the “Growing Season” playing over lunch. I guess that’s not really spare time is it?”

Trevor and Matt will be departing July 11th and returning August 10.

You can catch Trevor perform this Thursday, July 8 at The Growing Season Juice Collective on Algoma between 1145am and 145pm and with band, Last Night, Friday July 9 @ Jack’s from at 1145pm on the Blues Walk.