THUNDER BAY – It will be “Saturday Night’s Main Event” at the Fort William Gardens on Saturday night. There are six matches on the Wrestling Superstars card that night. It is set for an evening of excitement starting with some of the squared circles top upcoming starts in tag team action.

A Thunder Bay fan favourite, Lanny “The Genius” Poffo will put his undefeated record in GNW on the line against the self-proclaimed lady’s man Jeremy Prophet. This match will pit the storied wisdom and experience of The Genius against the youthful arrogance of the Montreal based Prophet.

On Friday, in Thunder Bay, at the Boys and Girl’s Club, The Genius will be on hand to share a message with young people in Thunder Bay. It is rumoured that Poffo may face a rematch against one of Thunder Bay’s pound-for pound-best wrestlers, Kaitlyn.

The 31@ Junot Centre and Vince Mirabelli from RE/MAX Realty are sponsoring 24 young people from the Boys and Girl’s Club to attend the match. It is likely Poffo will have his own local cheering section. 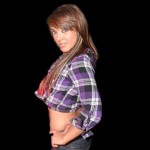 In the Women’s Match with a Thunder Bay flair as Josianne from Montreal Quebec is set to take on Candy Girl, a 105 pound package of wrestling dynamite. The special guest referee will be Clint Harris from the Chronicle Journal.

Harris’s task as ref is likely to be less of a handful than main event special guest referee Terry Funk. More about the main event a little later…

In one of the feature matches, The Honky Tonk Man will continue his feud with long-time rival and self-proclaimed “King of Canadian Media” Vinny Glyde. Glyde is bringing extra help to the ring in the presence of Dee Rock from Rock 94.

As Dee has been training hard under fitness guru Rosalee Andersson from X-Hale, it is still unknown if the brunette bombshell is plotting to take a bigger role in the match.

This stellar card has two main events. First, legendary wrestlers Scott Steiner and Kevin Nash are set to got at each other. The seven-foot tall Nash at 305 pounds has both the height and weight advantage over Steiner. However one should never count “Big Poppa Pump” out when muscle and determination are part of the equation.

The final event of the evening is scheduled as a no disqualification, falls count anywhere match between the legendary Vampiro, who is making his hometown debut wrestling in this incredible card, and the maniacal Hannibal.

Hannibal has been taunting Vampiro ever since the match was signed.

The main event is going to be under the control of hardcore wrestling legend Terry Funk. Max Moskal says, “Terry Funk is the only person we could find who could (hopefully) keep these two under control”.

On Friday afternoon, at 2:00PM at the Prince Arthur Hotel, there will be a press conference, where scheduled to be on hand are the hardcore legend Terry Funk, the innovator of the moonsault, “The Genius” Lanny Poffo, the “Apocalyptic Nightmare” Hannibal, along with the Cruiserweight Champion of the Maritimes Vinny Glyde, with his manager Dee Rock from Rock 94, as well as several other superstars from Great North Wrestling discussing Saturday night’s show.

Moskal states, “There is limited room for members of the public to attend this event”.

Thunder Bay has a reputation for being a “last-minute” walk-up city when it comes to concerts and sporting events. Many of the best seats are already going fast.

Moskal however shares that if you print out the coupon on the poster in this story, you can get $5.00 off your ringside ticket. Tickets are on sale at the Fort William Gardens Box Office or can be ordered by phone at (807) 625-2929. 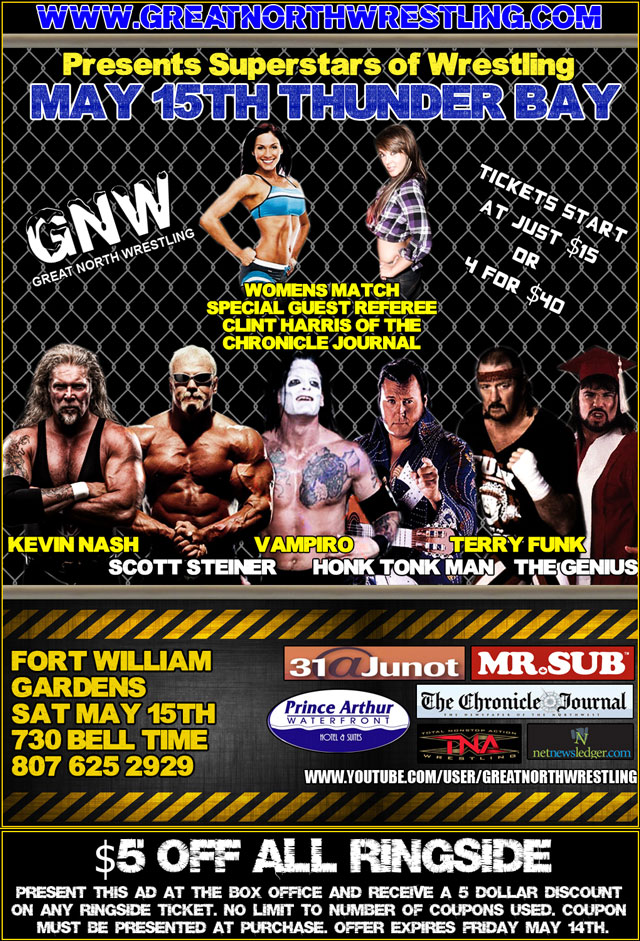