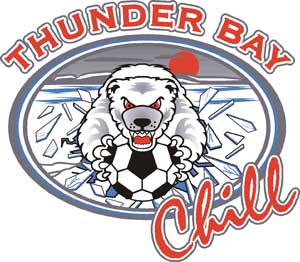 The Thunder Bay Chill would like to announce two major signings for the team’s Premier Development League (PDL) roster, as Brandon Swartzendruber and Nolan Intermoia will return to the team for the 2010 season. Both players were part of the Chill’s 2008 championship winning season, and will look to bring the league title back to the city of Thunder Bay.

Brandon Swartzendruber returns to the team following a successful 2009 season with the Harrisburg City Islanders of the United Soccer League (USL) Second Division. Swartzendruber played for the Chill in the 2007 and 2008 seasons, where he led the team in scoring, and was second in overall league scoring in 2007, and fourth in 2008. Head Coach Tony Colistro is very excited about Swartzendruber’s return stating “we were strong last year, but one of our problems was putting the ball in the net, Swartzendruber solves that.”

Returning for his fourth consecutive season, Nolan Intermoia will enter the 2010 season as one of the team captains for the Chill. Recently released on the last day of tryouts by the Pittsburgh Riverhounds of the USL Second Division, Intermoia is looking forward to the 2010 season and has set some clear cut goals. “I believe our goal for the season is win the PDL championship. Along with that, secure the Heartland Division, and host the playoffs” stated Intermoia.

The announcement of these two key roster pieces will continue to fuel the anticipation for the 2010 season, as the Chill have broke the previous record for season-tickets sold. Fans and season-ticket holders will get their first chance to see Swartzendruber and Intermoia during an exhibition series against the Winnipeg Sons of Italy on Saturday May 29th, 2010 at 7:30 p.m. (EDT) at the newly renovated Chapples Park.